By: Messiah M, Levi B, and Muhamud H 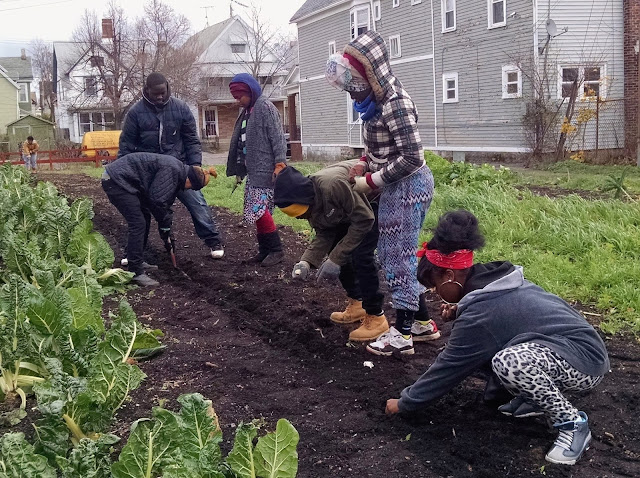 At MAP we plant garlic in the late fall to early winter. Garlic is an allium, which is a genus of plants. Onions, leeks, shallots, and chives are all in the allium family. Garlic is harvested in the summertime - usually in July (perfect for barbecues!)

Last winter MAP youth started a community garden. The idea was proposed by Katie, the Farm Manager. A garden would be a way to beautify the area, bring the community together and to have something run by MAP youth. It would be a place for MAP youth to see how plants grow from start to finish; from seed to table. 'Da Garden' is on Breckenridge Ave and is part of Grassroots Gardens of Buffalo community garden network.

In November, our Citizenship & Organizing Group participated in several general assemblies for Buffalo’s new Participatory Budgeting process.  The purpose of the general assemblies was for a district to work together to determine how to spend $150,000 from the government.

As we entered the building, we saw some leaders that were already there and we set up a poster about our group’s healthy corner stores project.  As other people entered the building, we asked them to complete a survey to see if they are aware of food deserts and to get their opinions on corner stores.  Some people didn’t want to share their ideas with us and that is understandable.  As the people filled out the survey, we found out that there were two people who were already working on the same project as us.  There were a lot of people from the Masten district at the Participating Budgeting meeting.  Most of them were adults, but there were two teenagers there.  Some of the participants were from another state, so we could tell that they truly cared for the district for travelling from such a long distance.  The news was also there and they were interviewing people.