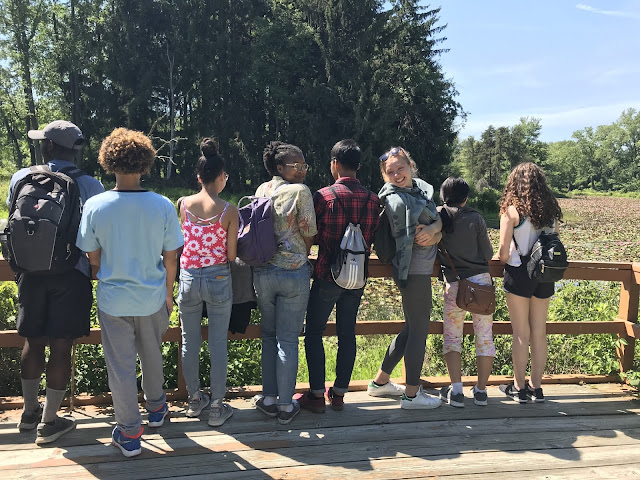 Early in the morning, me and the rest of the MAP youth visited the Reinstein Woods
Nature Preserve in Depew, NY. I wasn’t expecting the woods to be how they were.
But as soon as I got there, I realized it was awesome.

The lilies that were growing in the lake were precious to see. In Reinstein Woods, I saw animals
that I’ve never seen before and ones I am more familiar with.

Some of the animals I saw were snakes, chipmunks, deer, monarch butterflies, and caterpillars.
The expression that I got from being in the woods and able to see the animals was full of joy. 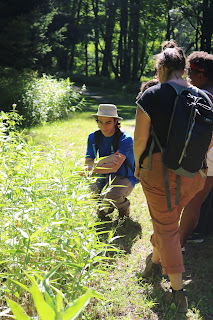 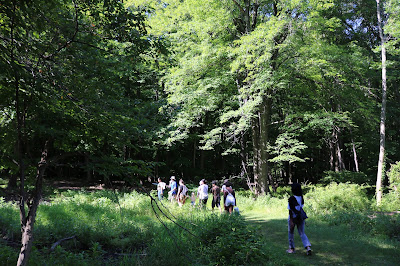 Reinstein Woods is also home to so many different kinds of trees. I saw the oldest and biggest beech tree in New York State, and I was so sad that it is dead now. What really captured my attention was how Reinstein, the man who first bought the land, cared about the environment and how much this world would be better if we had more people like him.

The history of Reinstein Woods made me feel important and grateful to have visited the woods. Every time I visit the woods, I feel grounded and happy and that’s exactly how I felt after visiting Reinstein Woods. It was a great experience!

Orientation! What is it Good For?

Orientation! What is it Good For?
By Birch K

“Why haven't we done any real work yet?” 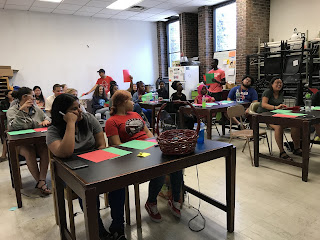 Not something you’d expect to hear from a teenager, yet it’s something I wondered just about every day for the 2 weeks of my orientation. I heard it from some of my peers too. I personally had come to get my hands in the dirt, others were excited to get ‘real life’ work experience. Yet here we were doing name games and getting lessons every morning. It was valuable for sure, but I say this in hindsight. At the time I wanted to know why the curriculum involves so much learning? Why couldn't we just jump right in? It’s been 3 years and I’ve observed folks employed at MAP with different levels of prior knowledge, the value of the 2 weeks quickly becomes evident.

So what is the orientation? Every year, MAP employs roughly 25 new youth for a six-week summer employment program. And every year, two of those weeks are dedicated to a "youth orientation." Essentially, we spend two weeks giving new youth the knowledge they need to be familiar with MAP; so they’re comfortable doing the work they will be responsible for in the following weeks. Most people coming into the program do not immediately know what food justice is, how to make a kohlrabi, or what organic really means. Working at MAP and within the wider food justice community requires vernacular you won't necessarily just pick up if tossed into the work. Maybe you know how to cut kohlrabi safely (hint: cut it in half, peel, and julienne with a sharp knife), but that’s where the learning ends. However in those 2 weeks prior to jumping in you get to see the context you're working in. New youth are introduced to the idea of food as a part of a wider system; full of many working parts that worked together to have the kohlrabi end up on your cutting board. The idea of your food not beginning with your plate, or even a seed but with people. So, in the first two weeks, we get to know ourselves and the people around us a bit better. This year that took the form of a writing activity, we envisioned ourselves as parts of nature. Later there will be exercises to envision a perfect farm and work on MAP's farm, and when it is time to cut up that kohlrabi, it won't be a meaningless thing. The experience will be an accumulation of 10 days of learning.

Just walking into a kitchen, identity workshop, or farm isn't going to give you the whole experience of MAP. One could easily engage with every part of MAP without understanding how cooking, growing and food justice are related. Knowing the value of a piece of produce grown without chemicals allows for a more enriching learning experience. So while 10 days may seem like a large time investment to some, it pays off when you can walk out and see your plate in a whole new way.

My name is Pepper. I am sixteen, and I am a farm specialist here at MAP this summer. I work with
three other Farm Specialists and the Farm Interns to do jobs on the farm like weeding, transplanting, or harvesting crops, as well as other general farm maintenance. 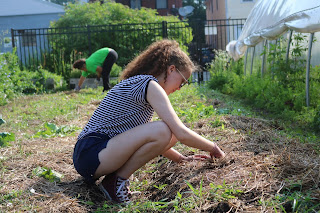 When new youth come to work in the farm, it is important to be a mentor for them, especially because many have never worked at a farm or garden before. The other specialists and I encourage the new youth to get their hands dirty and show them the correct way to water, harvest, and weed. I think my role as a far specialist is very important because I get to introduce teens working at MAP to an environment that might be new to them. The farm at MAP is a great real life example of a type of farm tey learn about in other MAP work areas.

Being a farm specialist has changed a lot of the way I think about food and where it comes from. I feel much more knowledgeable about the production of food crops in general than I did before I had this specialty. It has made me think a lot about where my food comes from and how it was treated. Working on the farm has also made me more interested in growing my own produce as well.
Working on the farm can often be physically demanding, which is occasionally a challenge. When I first began working on the farm, I had a lot of sore muscles. However, while the work is a lot of physical labor, it is often calming and relaxing mentally.

Overall, working as a farm specialist has positively influenced me and has been a great experience. 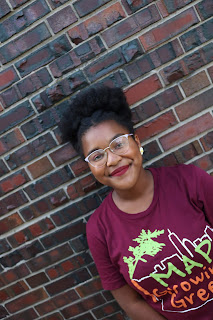 Hi, my name is Birch and this is my 4th summer here at Massachusetts Avenue Project (MAP).

I started here when I was 14; I was just leaving middle school. I had a budding interest in sustainable agriculture and a big mouth. I didn't know the difference between bulldozing everybody in a group project and leadership. I thought using my silly screenname to share with professionals made me “unique” instead of unprofessional. Also, I was not self-aware like I needed to be. However, that has largely changed.

Since I’ve been here, I’ve grown as a leader, activist, and person. I still love gardening but as I engaged with other events, workshops, and training I found my interests had evolved. My first school year, I worked in the farming group where I learned how to work well within a team. I also learned that you can’t turn a compost pile alone, so I had to be more diplomatic. That year, I began attending the annual North Eastern Sustainable Agriculture Working Group (NESAWG) conference. At my first conference, I made small talk with people twice my age about the dairy industry. The next year, I found chicken rearing techniques didn't peak my interest, but social justice did. At the 2016 conference, I attended agriculture workshops, but I was empowered to attend workshops exploring identity and social justice. I was ready to put down my shovel and pick up my protest sign.

I became really interested in the connections between food justice and racial justice over the course of that year. It was also a year of personal growth: we began a lot of travelling and when I attended workshops I slowly became more mature and aware of my place in the world and the privileges I do and don't have. I joined the Western New York Environmental Alliance (WNYEA) as a MAP representative. There, I am honing my leadership, time management, and communication skills. I am improving my professionalism, such as creating a non-silly email and checking it regularly. Over the most recent school year, I was heavily involved with the WNYEA and was able to travel to California for a conference!

Now in 2018, I’m realizing how much I’ve learned and changed going through the MAP program. At MAP, you don’t just see how wide your horizons can reach, you are able to explore how far I can go.
on Thursday, July 12, 2018 No comments:
Email ThisBlogThis!Share to TwitterShare to FacebookShare to Pinterest
Labels: #MAPYouth, biographies, Birch K, Growing Green, Summer 2018
Newer Posts Older Posts Home
Subscribe to: Posts (Atom)